Wow, what a bean!

Sales of vegetarian food alternatives have increased in recent years and new great substitutes for meat are emerging all the time. That’s great, but is it enough?

Elin Röös, assistant lecturer at SLU, says in an article that there is probably no product that is worse for the climate than meat. Of course, it is great that sales of vegetarian and vegan products are increasing. But according to Elin, it would be best if we chose those vegetables that is possible to get good harvest on a small area with small inputs, such as cereals, legumes, root vegetables and fruits. And we should keep away from tropical fruits such as avocado, pineapple and coconut.

Tropical fruits are often grown in regions with very high biodiversity, it is very unfortunate to deforest such regions, says Elin.

Soybeans, vegetarian sausages and other meat substitutes are popular, but these products are more climate-impacting than if we would eat the beans directly. The positive thing about the substitute products is that they do not come up to the extreme climate impact that meat do. Vegetarian products can in some cases approach chicken in terms of climate impact.

Beans fix their own nitrogen

Elin strikes a battle for Swedish beans in an interview in TV4. In the interview we learn that legumes can, together with the bacteria in the soil, fix their own nitrogen from the air. There is no need to fertilize the legumes. There is a large selection of Swedish beans, in addition to the classic brown and yellow peas, there are many kinds of garden beans and field beans. Unfortunately, many of the beans are used for animal feed instead of eating them directly ourselves.

It’s time for a renaissance for the bean!

Elin thinks that the bean’s somewhat dull status is about being and has been a bit of “poor people food”, but she wants a renaissance for the bean as it is a fantastic food!

Elin tips on various products produced by Swedish legumes, including tempeh, which is a fermented product and is great to make from example, field beans. It is also possible to make flour from beans that are perfect for baking or making pasta and thus get higher nutritional value in the products. Legumes are rich in protein, they are climate smart and packed with vitamins and nutrients which makes it a really good alternative to animal products. In addition, they are kind to your wallet.

Today we grow about 2% of the arable land in Sweden with legumes but Elin wants to do more. Above all, she means that beans function perfectly as a crop between other crops because they fix nitrogen which leaves some nitrogen in the soil. By growing legumes between cereal crops on the same land, you do not need to fertilize as much.

Elin’s favourite is the Swedish grey pea which is very similar to chickpea which has become very popular but unfortunately is difficult to grow in Sweden. Most of the legumes in our stores today are imported, which is a shame, Elin urges us as consumers to start demanding the Swedish beans.

You can find out more about which cookies we are using or switch them off in settings. 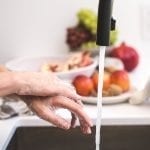