”The app makes it easier to take care of all the food in our store. It’s also better from an economical standpoint and of course for the environment” – Faouzi Makso, Store Manager at Stora Coop Umeå.

Deligate is very proud to announce our new cooperation with the supermarket chain Coop Nord. During the coming three coming months our systems will be installed in all of Coop Nords 72 stores located in northern Sweden.

During the first two quarters of 2018, four Coop-stores in Umeå have tried the system (Stora Coop, Holmsund, Teg and Mariehem) and Coop Nord have now made the decision to implement Deligate in all their stores.

“We are very humbled and proud for the opportunity to work with Coop Nord regarding the issue of food waste. We like that Coop Nord is very eager to be a front runner when it comes to sustainability within grocery stores. We’re helping new stores to get started with Deligate on a daily basis which means that we’re also helping new stores to lower their food waste on a daily basis and this has been our vision from the beginning”, says Adam Vikström, CEO of Deligate. 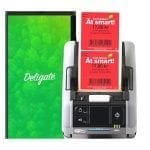